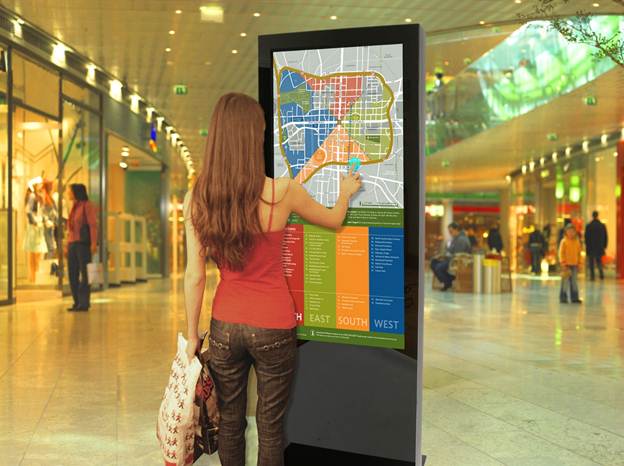 The digital signage industry is predicted to grow from today’s USD $10 billion to over USD $27 billion in 2022 – only five years away. Major brands are rolling out large investments in digital signage advertising that’s taken on a new dimension that’s more interactive, better integrated to social media, and personalized to the consumer. Touch screen technology is playing a bigger and more important role in digital signage as well as it’s come be used in new applications from the restaurant industry to retail.

Digital signage is moving increasingly toward interactivity, such as pattern recognition, personalization and social media integration. In one of their London pop-up stores, Nike introduced digital displays that are only activated as customers walk past them, lighting up with images of athletes running while wearing in-store products. Audi also opened a location that was too small to display actual automobiles, so instead installed massive digital displays to provide immersive product viewing. Other retailers have taken a more pragmatic approach, by using kiosks to help customers and to help sales staff speed up the process of looking for shoes sizes.

If you want to make the most of new trends in digital signage that small and large businesses today are looking for, you need to find the right touch screen technology for the job. There are several types of technology available from touch screen manufacturers like A D Metro designed to suit different applications and environments. Outdoor digital signage displays must withstand rain, snow, or sleet, not to mention the potential for vandalism, and not all resistive touch screens are up to the task. For outdoor environments, digital signage needs to be both weatherproof and vandal-resistant, and A D Metro touch screen technology is an option that provides ruggedness and durability, while optic enhancements keep the picture crystal clear. Indoors, you can take full advantage of interaction with a capacitive touch screen, allowing audience members to play or browse and engage more deeply with a brand.

As more and more restaurants are considering tableside screens such as menus or games that deliver specials directly to the customer, surface capacitive screens are taking up their role as an option for applications that require a light touch and great optics but are still durable and vandal resistant. Surface capacitive screens made by manufacturer A D Metro are also contaminant resistant, making them ideal for restaurant use, either as mobile PoS terminals for servers or tableside menus. Several years ago, Chili’s introduced tabletop screens that allowed customers to place orders and pay the bill, and even gave families with kids access to video games that could keep them entertained. A 21st century update to the crayon and kid’s menu, tableside video games have made it easier than ever to take kids out to restaurants.

Digital signage is a multi-faceted and growing industry that will be worth over $27 billion in only a matter of years; make sure you have the touch screens that are right for the job if you want to grow alongside it. Typography: the psychology behind the age-old tradition